My family and I went on a vacation for the month of July to Vancouver, British Columbia, Canada, and what an incredibly beautiful land. We decided that we did not want to just go for five days or so and be the average tourists, rushing to see as much a possible in such a short time. We wanted to “live” there. We wanted to take our time,establish ourselves as much as could be done for a month, and attempt to live as much like a local as we could. I have to say, it went pretty well and we had a wonderful time. We enjoyed living in a large city, using public transportation and going about on foot, and found it to be a very efficient mode of getting around. Even when leaving town on a short day trip, the public transportation was fine.

As a martial artist, I did not want to go the better part of a month with little or no training. I had been following a world renowned school of European martial arts on Twitter for some time and checking up on their web site regularly after a student of mine told me about them several years ago. This school is Academie Duello, in Vancouver, directed by Maestro Devon Boorman. Before we left Texas for Vancouver, I went ahead and signed up for their course entitled, A Taste of the Renaissance. It’s main focus is on the use of the rapier, a weapon I have never had any previous training with. So, I was excited to be signed up and getting ready to attend such a well known school. My expectations were more than met, and I had a great time training there.

The instructors leading the course of study I was taking were very knowledgeable, as well they should be, and were also genuinely friendly. They made sure each student was learning what they were suppose to be learning while maintaining the pace of the prescribed amount of time for the course length. In all, having run my own organization of Historical European Martial Arts for a number of year now, I was extremely impressed, and I loved every single minute of training time there. Open Floor Fridays are also a great feature of Academie Duello where each member may attend an open floor time to train. Students may spar, drill, review, etc…, and it is an incredibly valuable time to spend at the school. It was at Open Floor Friday where I was “broken in” with my first taste of sparring with the rapier, when a great guy named Darren ask me if I would mind sparring with him. I had not planned on sparring,but was excited about the prospect and took him up on the offer (I was smiling a great part of the time inside of my fencing mask as we fought). I did inform him that while I had a good deal of experience in other weapons,I had never sparred with rapier but that I would be happy to spar with him. We dawned our fencing masks, saluted, and I got to fight a very skilled student of the rapier. He outclassed me for sure with the rapier, but I managed a couple of hits (2 out of 10 passes ain’t great people), but hey, at least I didn’t lose every time. I am honored to have been able to spar with him and hope that some day we will once again cross swords. 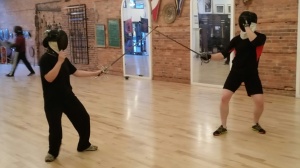 As the Open Floor Friday went, I ended up in a rotation of various sparring partners overseen by an extremely skilled swordsman names Greg, of which I was unable to even touch with my rapier that evening, but learned a great deal from him in the process of losing every encounter with him. Each pass was a learning experience, and his verbal input was incredibly valuable. All in all, it was a great evening. The stance, form and technique of the rapier is in many ways different from the other types of swordsmanship that I have trained in, so I found fatigue creeping in a bit sooner than I normally would have. Safe to say I was a little soar the next day, and that’s a good thing.

I was also able to meet and chat with Maestro Devon Boorman for just a little bit. He is a wonderfully welcoming and genuinely nice gentleman. We unfortunately did not have the opportunity to spar in any form while I was there, but I am hoping that next time we can make it happen. I have no doubt it would be great fun, and again a learning experience.

I came away with a very solid amount of foundational knowledge about Italian Rapier, a couple of more relationships established with some very nice people, and I hope to be able to make it back to Academie Duello in the future. I have to give a sincere thanks to my instructor, Greg Y. and Kate, for all of their attention and for their dedication in the instruction of our class. Thank you both. You are a credit to your school. You are welcome to train with us here in Texas anytime should you ever make it down this way. 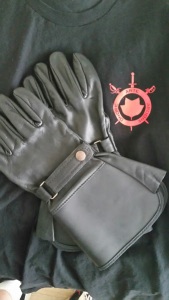