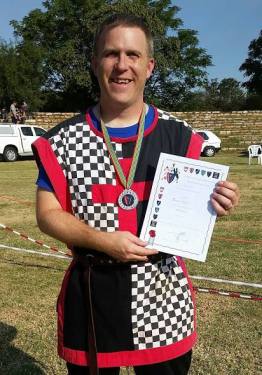 Bro. Jeff has been training in Historical European Martial Arts for 16 years.  He started his journey in European Martial Arts under the instruction of Fight Master Philip Burthem from 2003-2007. Bro. Jeff has since trained extensively with fellow historians who have studied both Asian and European martial arts, collegiate fencers, and experienced S.C.A. Combatants. He also trained in Capoferro Rapier at Academie Duello in Vancouver, British Columbia, Canada. During his time in South Africa, Bro. Jeff trained with the South African Guild for Medieval Combat Studies. Bro. Jeff has trained in and instructs the use of the Arming Sword, hand-and-a-half sword, rapier, longsword, dagger, pollaxe / halberd, various shields, hand ax, spear, archery to include Medieval Crossbow and also empty-handed fighting (Ringen).

He also has experience in Asian martial arts and started his martial arts journey at the age of 5 with his Dad’s Shotokan sensei in 1977. He later took instruction in GoJu-Ryu Karate and Aikido.

Bro. Jeff has given instruction in Historical European Martial Arts at the college level, having taught at McClennan Community College in Waco,TX. He also taught H.E.MA. to children in Waco,TX area private Christian schools, and is a teacher working in the field of Education for many years. He currently instructs adults at his home-based, Christian martial arts school and has been an instructor since 2007.

Bro. Jeff is a graduate of American Military University with a BA History degree. He took courses specifically targeted at medieval and ancient warfare, among many other areas of historical course work. In 2010, Art of Combat European Martial Arts (formerly New Ulster Steel Fighting) was recognized and registered by the United States Martial Arts Association, now the World Wide Martial Arts Association. Bro. Jeff’s rank is certified by USMA based on his martial arts experience and founding of his martial arts school. Bro. Jeff actively trains new members, playing a vital role in their development as well-rounded martial artists, and actively takes part in freestyle combat with the veteran members at training sessions. He is the Tournament Director and has been marshal of several tournaments. He was captain of the 1st place melee team at House Wars III in April 2016 and at FIGHT FEST! II in July 2016.

John Dunwoody has been a member for twelve years. He has worked his way up through the ranks to earn the position of Senior Assistant Instructor, and Chapter Instructor. Dunwoody plays a vital role in the training of members from the trainee ranks to Scholar. He has performed with distinction in tournament combat as a member of two champion teams in House Wars I and II combat tournaments. Dunwoody has experience in Asian martial arts, specifically in Japanese Kempo Karate. Free Scholar Dunwoody is currently a student of American Military University. Dunwoody’s scholarly endeavors are in keeping with A.O.C. European Martial Arts desire to produce well-rounded martial artists. Dunwoody is also senior assistant instructor in our children’s program assisting in the instruction of Historical European Martial Arts to children from the ages of kindergarten to 6th grade. He has excelled in his roll as an assistant instructor.

Scholar Charles Dunwoody has been a member for many years and is a tournament marshal. Dunwoody has played an active role in assisting in the training of members at the Trainee level up to the rank of Sergeant. Charles Dunwoody has performed in tournaments with great distinction, having claimed the title of Tournament Champion of Individual Steel Combat in the 2010 House Wars II Combat Tournament. He has also been a member of a first place champion team in the Team Steel Division of tournament. His keen eye for the field of battle and his leadership abilities are well known in the freestyle combat environment. Scholar Dunwoody served with distinction as Marshal of the first annual FIGHT FEST! as well as FIGHT FEST! II in July 2016 Dark Ages Combat Tournament.

He is a graduate of Tarleton State University with a degree in Psychology. His scholarly endeavors are in keeping with our desire to produce well-rounded martial artists on both the physical and intellectual levels.

One reply on “Bios”