Although Charles Martel ( d. 741)1  is one of the most noted heroes in Christianity when studying one of the many violent encounters between Christian and Muslim forces, Charles “The Hammer” Martel was no marionette of the Church. He was quite an independent and practical thinker as a military leader and as a politician.

Charles’ military abilities were already well know when he was confronted with perhaps his greatest military threat, a large invasion of Muslim Moors into Frankish
territory. The Muslim invasion would reach its climax as Muslim forces under the command of Abd ar-Raham2 faced off in a pitched battle against Charles’ Christian forces at the Battle of Tours in October of 732.3 In the period building up to this battle through its outcome, Charles would prove himself a wise and knowledgeable leader. One of the greatest assets to a successful military leader is to have good knowledge of the enemy and this is something that Charles possessed. While Charles was already on campaign in a region along the Danube, the Duke of Aquitaine who had already seen defeat against the Moors found and warned Charles of the situation.4 Though Charles was urged fervently to move immediately against the Muslim forces, his knowledge of the Muslim Armies’ habits played key in Charles’ plan of dealing with the invasion.

Charles understood that one of the key aspects of Muslim military operations was gaining huge amounts a booty as they plundered and looted. This booty was the chief means by which the Muslim personnel were paid for their service. What Charles
understood correctly was that this slowed the Muslim forces movements, often to the point of making an army cumbersome. Charles used this added time sacrificed by the 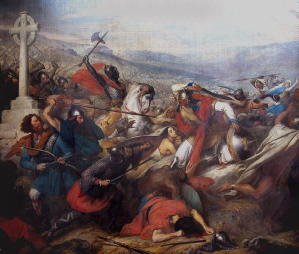 Muslims to ready his army to counter the Muslim Moors’ invasion.5 Something he also knew was the composition of Abd ar-Raham’s army. It was mostly cavalry (20,000 – 25,000) with a smaller number of infantry in support, which told Charles that this was an expeditionary force rather than a force that had come to remain and occupy Frankish territory.6 The amount of loot carried by the Muslim force would serve to slow what would normally be a faster rate of maneuverability of a cavalry force on the march. As far as the force strength of Charles and his Frankish forces, there is a wide range of estimations made by historians ranging from 30,000 to 80,000 strong with only about 20,000 or so cavalry troops.7 The Muslim forces are estimated to have been roughly 25,000 cavalry troops plus supporting infantry.8 Clearly the Muslims carried the advantage in actual cavalry over Martel’s Christian forces, but what Martel did have going for him in the realm of maneuverability of his force is that his army was composed mostly of mounted infantry.9 This allowed his infantry to travel at a much more rapid rate and Charles factored out the fatigue of a forced march on foot with a battle imminent upon arrival to a location.

Charles moved his force to intercept the Moorish expeditionary force close to Tours, the place for which Charles’ battle with Abd ar-Raham’s army would get its name. Charles arrived and positioned his army on high ground to await Abd ar-Raham’s next move. Once in position, Charles, realizing that he could not hope to defeat the Moorish cavalry in a cavalry on cavalry match up, dismounted a large number of his

well armored, well equipped veteran cavalrymen and placed them into the front ranks of his army’s formation since his army consisted of a large number of lesser armed and lesser experienced conscripts.10  This, Charles correctly believed would bring confidence to his conscripts and thus greatly decrease the chances of them breaking and routing under the pressure of continuous cavalry charges from the Moors. Charles maintained a reserve element of heavy cavalry (mounted) to use at key points in the coming battle as they were needed. They were indeed used and would greatly affect the outcome of the battle.

The Muslim forces formed up and began to assault Martel’s position. Whether due to poor communication within the ranks of Abd ar-Raham’s force or simply due to the
characteristic nature of a mostly mercenary force to have elements that desired to take action independently without orders, the Muslim forces attacked piece-mill for first phases of battle. This caused their initial cavalry charges to be repulse for lack of strength in numbers, reducing the shock characteristic of a successful cavalry charge. As the battle progressed and the Muslim forces became more committed to the engagement and appearing to make their way into the weaker center of the Christian formation, Charles ordered a detachment of his reserve cavalry to ride around the flank of the Muslims and attack their rear and supply train. This was a key
move in the battle in favor of Charles. When word of this reached the Muslim battle lines it started to cause a number of the Muslim forces to fall back without orders to protect their main camp and accumulated booty.11 When this began to take place, Charles made use of perfect timing and ordered his army into a fierce all out counter attack, driving down from their hilltop position. The shock of the Christian counter attack was greatly felt by the Muslim forces and when Charles’ cavalry managed to kill the Muslim general, Abd ar-Raham, the Muslims retreated to their encampments.

The night passed without a Muslim counter-attack and the next day Charles’ forces learned that the Muslims had completely withdrawn,leaving their spoils behind for
Charles’ army to take. This battle was a decisive victory for Charles and his Christian Frankish army. While it did not completely stop Muslim attempts into Europe, it made for a turning point in what had been a century of Muslim successes against Christian Europe. The Battle of Tours solidified Charles Martel’s reputation as the greatest military leader in Europe and placed him in the premier political position in all of Frankish territory. His exploits at the Battle of Tours also gained even greater attention from the Catholic Church of Rome in its European interests. In particular Charles caught the interest of a Benedictine named Wynfrid, or better known as Boniface who later became St. Boniface.12 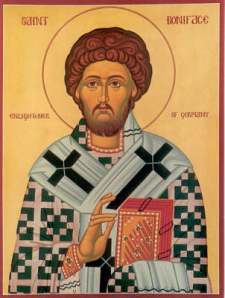 the Catholic Church while maintaining status under the direct authority of the Church rather than Martel himself.13 By allowing Boniface to work in this way, Charles Martel opened the door to a great level of Catholic influence on the Frankish people that would later lead to such an alliance with Charles’ son, Pepin, as the Church had desired after Charles’ death. But during the life and reign of Charles “The Hammer” Martel, it was made clear to the Church by Boniface, in spite of Charles’ lack of desire for an alliance with the Church that Charles was key in Boniface’s work for the Church in Europe. “Without the protection of the prince of Franks, I can neither rule the people of the Church nor defend the priests and clerks, monks and nuns; nor can I prevent the practice of pagan rites and sacrilegious worship of idols without his mandate and the awe inspired by his name.”14 Boniface gave great and deserved credit to Charles Martel in the advancement of Boniface’s work for the Church and Christianity, yet Charles once even turned down a request for military assistance from the Church in Rome to move against the Eastern emperor in Constantinople when Rome of Constantinople were in dispute about the authority of the emperor as opposed to the authority of the Papacy.15

While Charles “The Hammer” Martel has been hailed as a hero of Christendom for his exploits in the Battle of Tours, and played a major role in the spread of Catholicism in Europe, he likewise had no problem saying no to Rome. Charles Martel did indeed halt of series of Muslim military successes and turned the tide for Christendom in its fight against an aggressively spreading Muslim influence. Charles also played a key
role in the protection of St. Boniface’s mission for Rome while maintaining his independence from the authority of Rome. Charles was one of the last political and military authority to do so for many centuries to come as Europe increasingly fell under the auspices of the Catholic Church.

4.Carey. Warfare in the Medieval World. 43